An evening at the Bandra Wine Festival. 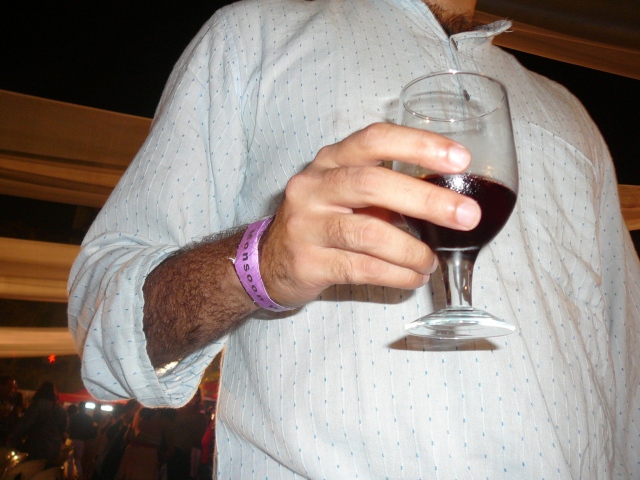 When I mentioned to hubby, rather casually, last Friday morning that the Bandra wine festival was happening over the weekend, I expected the usual – initial enthusiasm, host of phone calls to all the friends asking who wanted to go, lots of planning and then finally, no action. This is what happened last year. We are great at making plans and very slow on the execution – I like to call it baby-induced-inertia, although I think it is not fair to the baby at all. It is this vague fear of venturing into the unknown and finding one’s place in a new city – if you can call it that after nearly a year and a half here. Every time we decide to try out something new – a restaurant, a play – I let this fear hold me back and pretend it’s because of how it will affect the baby. Now that he is two and thankfully, largely low maintenance, I cannot use that excuse at all. So I am very glad that this time around the husband made quick plans with a couple of friends and we headed to the D’Monte Park Recreation Centre.

Our pass entitled us to wine tastings at all eleven of the wineries represented. A quick survey of the whole place – the wine stalls, the art installations and the food court – later we settled on a table by the music stage to be our home base and headed out to begin our tasting. We started at Pause Wines and between the husband and me tried out four wines. None of the wines appealed to either of us; I think it was because the whites had not been chilled and the reds had too many tannins – they left my mouth dry.

We continued our exploration with Vallonne and Reveilo Wines. At the former I loved the aged, reserve Cabernet Sauvignon – oaky, spicy, crisp and at the latter the chilled Chenin Blanc, a slightly sweet wine, hit all the right notes on my tongue. I also liked an Italian wine I had never had before, the Nero D’Avola, at Reveilo – completely different flavours from what I am used to.

Three wineries and twelve wines in and we were already overwhelmed. Tasting so much wine requires a lot of discipline. My palate is not so refined as to be able to distinguish the subtleties of flavor with one sip. I kept drinking multiple sips of every wine and pretty soon my palate was shot! But this post – indeed the trip to the wine festival itself – is not about judging the wines. It is about finding a wine that you want to sit down with, as Vikram Seth says in his poem.

Sit, drink your coffee here; your work can wait while.

You’re twenty-six, and still have some of life ahead.

No need for wit; just talk vacuities, and I’ll

Reciprocate in kind, or laugh at you instead.

The world is too opaque, distressing, and profound.

This twenty minutes’ rendezvous will make my day:

To sit here in the sun, with grackles all around,

Staring with beady eyes, and you two feet away.

So we each picked a glass and settled down. It was a beautiful venue for a festival – balmy weather, lot of space for people to walk around and enough tables and chairs to sit and sip. It had a college festival kind of atmosphere and took me back more than a decade. Except this time we are all grown up.

People walked past us and we listened to the performance of the orchestra of voices. Of course it is impossible to really hear anything in such places, even your own voice talking to a friend. And often even the sound of your own thoughts. The lights were very bright, but it was impossible to see anything. There was so much going on, what does one focus on? But that is never a bad thing. It is necessary to be disoriented sometimes.

I remember at school and college festivals it was extremely important to always have your gang around you and to keep talking and doing something. The minute I stood still I felt conscious of being stared at. But that evening I sat quietly with a group of friends, watching the baby play and skimming the horizon. Vikram Seth would have approved.

Soon enough though, hunger took over. We headed to the food counters which were an eclectic mix. There was WB foods which was serving tempura & fries, desserts and something called a china box, which was basically a stir-fry with rice or noodles, vegetables, meat and sauce. Then there was Mocha Mojo with their grilled meats, tapas, fondue and drinks, Koliwada which was serving up fried and tandoori meats and Ray’s pizzeria with thin-crust pizzas and pastas. But the thing that grabbed our attention was Ninja Sushi. Finally after a year a half, sushi!

I have to admit something here though. I wasn’t a huge sushi fan in the US. I would eat it to give the husband company and enjoy it too. But it was never at the top of my “Things to eat” list. But I have been craving it for a while now – the slightly tangy taste of the rice and fish, the zing of wasabi, the sour heat of the pickled ginger and the savory taste of soy sauce. My mouth is watering right now. 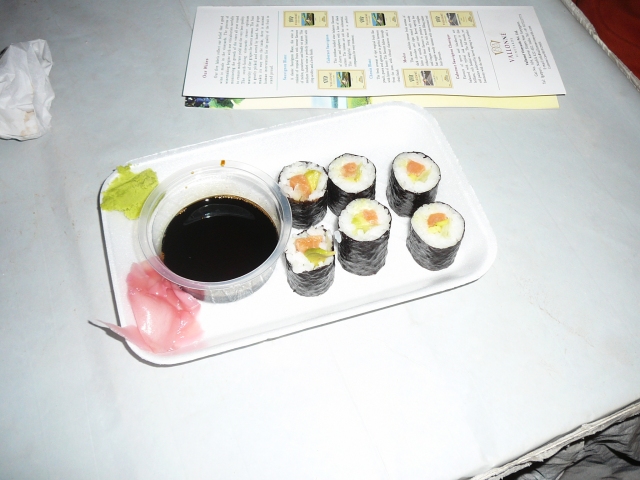 We had one order of the salmon sushi because they were out of the tuna and the prawn at the time. It was pretty good, although there was very little fish compared to rice and the ginger was not well pickled – it wasn’t soft enough. Still for a craving tongue it was bliss. The rest of the food was good and nothing more. We tried some fish fingers from Koliwada, chicken satay and mushroom aglio e olio (which was much too over salted) from Mocha Mojo, prawn tempura and china boxes from WB (too much sauce) and three kinds of pizza along with pesto pasta from Ray’s. The pizza took me back to the slices of NYC although they did not taste the same. It was the thin crust and the toppings – pepperoni, sausage and chicken- that jogged a memory. I thoroughly enjoyed chomping down on them. In my book anything with pepperoni on it is always good. 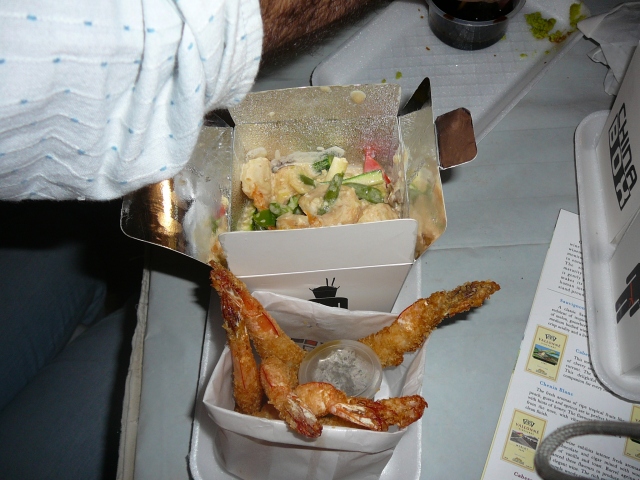 After dinner we got ourselves some more wine from York (a Rose) and Four seasons (Chenin Blanc again) and settled down to enjoy the music by The Jazzmates Duo of Giovanni Pereira and Aninha Lobo playing with Sharon Menezes on vocals. A few people started dancing and all the kids came out too, as did my son. As we sat and watched, a young woman walked up to the table and asked my friend if she could borrow a chair. I looked up and squealed like a teenager, “Oh my God!” Her mouth opened up into a big smile too. Old friends had found each other. She had been at Cornell with the hubby and since I visited often enough we had become friends too. We knew that she was in Mumbai and so did she, but neither of us took the initiative to meet up. We talked for a while and then she insisted that we visit them the next day and we all go out to lunch. So we agreed. Before the evening was over we were already coming back to Bandra the next day! 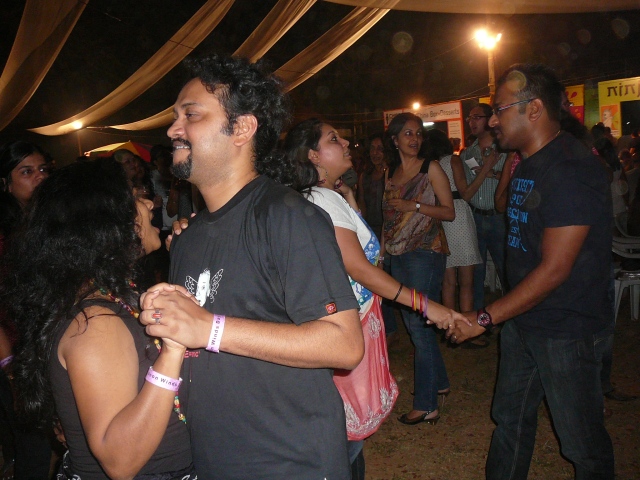 The evening swung along. The wine and the food had its effect. The dancing increased. Pretty soon Sharon was singing “I can’t help falling in love with you” on special request. As her deep voice filled the space we involuntarily started swaying too, with the baby in hubby’s arms. A friend walked up and offered to take the baby so we could dance. The hubby initially refused. Then I told him, why not? So we left the baby at the table and danced – for may be one minute. Because pretty soon a screaming baby was brought back to us – he has to be a part of the action! So I took him in my arms and with the baby on one side, I swirled and twirled, while the hubby led us as best as he could. And when Sharon sang “I can’t help falling in love with you” I looked into my baby’s big, happy eyes and crooned the words to him. He giggled uncontrollably.

The wine & music were soon over; but the Bandra Wine Festival did what nothing else could make us do – “Celebrate Bandra”, not one but two days in a row. That of course is what the next post will be about.

My thoughts are who I am and I am what my thoughts make me.
View all posts by Aditi →
This entry was posted in Baby, City Life, Favorite Foods., Life in general, Mumbai food, Party and tagged bandra, dancing, food, jazz, sushi, wine, wine tasting festival. Bookmark the permalink.

1 Response to An evening at the Bandra Wine Festival.